On the evening of March 30, a General Meeting of DP Diet Members was held at party headquarters.  The meeting discussed a proposal regarding the party’s future direction, entitled, “Forming a new Democratic Party in order to protect democracy and the lives of citizens” which had been approved by the DP Standing Officers Council on the previous day.  Following discussions lasting one and a half hours the assembled Diet members approved the proposal with a round of applause.

At the start of the General Meeting, DP President Kouhei Ohtsuka stated, “We are now at the start of the new financial year.  I have conferred with you all regarding the state of our party, and received much valuable guidance, and would now like us to make a new start.”  He said that the proposal had been made as a result of various deliberations and consultations that had taken place based on the points approved at the party convention of February 4, in which the DP had determined to “aim for a ‘new centrist party’ as soon as possible.”.

Ohtsuka went on to say, “I am well aware that there are a variety of opinions within our party.  Over the past 5 months I have listened to the voices not simply of our Diet members, but also of local assembly members, party staffers and those outside our party, and thought hard about what route we should take.  I ask for your understanding of the fact that it would be impossible to craft a proposal that would be welcomed wholeheartedly by everyone.  At this moment, with the current developments in the Moritomo Gakuen scandal, the Abe administration style of governance, with its blatant disregard of democracy, has reached its limits.  That is why we made the joint decision it was now time to make this proposal, with a view to uniting our colleagues who had been so ridiculously scattered apart at last year’s general election.”  Ohtsuka went on to explain the main points of the proposal.

2. Call on like-minded colleagues to join together

With regard to this, Ohtsuka explained, “I would like to call on like-minded colleagues while continuing with the stance of cooperation between the three parties (DP, Party of Hope and Constitutional Democratic Party).  However, I am sure that you are well aware of the situation in each party during the past five months, so while we will of course continue to work on inter-party cooperation, colleagues have been informing me of their heartfelt desire to form a new party with our former colleagues in order to take on the Abe administration which has been so dismissive of democracy.  Therefore, we intend to create a receptacle for those who have been saying that they want to unite in order to form a new entity to overthrow the Abe administration…This is not a reunification.  Politics cannot return to the past.”

Ohtsuka also commented, “Amidst such bewildering developments, the situation is different in each prefecture and even in each individual constituency.  Therefore, although extensive discussions will be held with like-minded colleagues in the committee for formation of a new party, there may be some persons who find it difficult to come to a decision, for a variety of reasons.  However, our ultimate goal is the same, so that “while paying due consideration to the individual circumstances of party politicians and candidates both at national and local level, we will aim to create a framework that will allow us to cooperate with as many colleagues as possible following the formation of the new party.”  He added, “I hope that once discussions have been concluded, we can unite together to form a new party, and then our old colleagues will join us to create a new gathering of forces.  Then in the latter part of the Diet session, during April, May and June, and if it is possible to extend the Diet session, July, we would increase public awareness of the new party through our Diet activities.  I believe this is extremely important, and that is why I have chosen to submit this proposal at this time.”

Ohtsuka reported that he had explained the content of the proposal that morning to party representatives (Standing Officers) from each electoral bloc, the party’s national youth committee, the female Diet members’ network council and the local assembly members’ forum, and said that he would continue to place weight on the voices of the regions in the running of the party going forward.  He also revealed some candidates defeated in last year’s general election had also expressed the desire to join in creating a new party.  Ohtsuka urged party members to accept the proposal, saying “I ask you to be understanding of the circumstances.  I am very aware that it is an extremely difficult decision, but I would like to lay the groundwork for moving forward with this as soon as possible.  I ask for your agreement and would like to take the first step on this path.”

After receiving Ohtsuka’s proposal, the General Meeting transitioned to a discussion forum, where the assembled Diet members exchanged views for an hour and a half.  Once discussions had generally come to a close, the General Meeting was reconvened.  Ohtsuka stated, “Whether they are members of the Constitutional Democratic Party, the Party of Hope or totally independent Diet members belonging to none of our three parties, our common enemy is still the Abe administration, the LDP administration that totally ignores democracy.  Therefore, we should join in a common purpose and form as large a grouping as possible.  Even if we do not succeed in persuading the Constitutional Democratic Party to join us, this proposal includes a framework which each of our parties can aim for from our various perspectives, so that we can continue to cooperate and unite together to fight the general election.”  The meeting then approved the proposal to form a “new Democratic Party” with a round of applause. 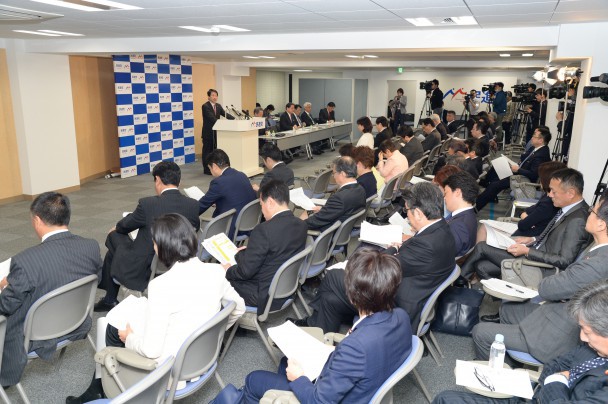